The art essay of the month

© akg-images / Erich Lessing.
"And after these things, I saw the Son of God hanging on the cross, and the aforementioned image of a woman coming forth like a bright radiance from the ancient counsel.” Thus Hildegard of Bingen begins to describe her vision of Christ’s sacrifice and the Church, the sixth such vision contained in her first book, Scivias (an abbreviation of Scito vias Domini, “know the ways of the Lord”), redacted between 1141 and 1151.

Hildegard was born around 1097 into a noble family in western Germany. The last of ten children, she was offered to the Lord and entered the convent at age eight. Sick from a young age, she remained physically frail until her death in 1179. Spiritually, however, she became a powerhouse of her century. Her correspondence includes popes and emperors, to whom she wrote with prophetic insights and stern warnings. From an early age, Hildegard was graced with numerous visions.

The sixth vision of Scivias deals with priesthood and the Eucharist. There was something timely about it: a few decades earlier, Pope Gregory VII (1073–1085) had implemented a major reform intended to raise the spiritual level and discipline of the clergy.

One of the many originalities of Hildegard von Bingen was to complement the verbal description of her visions with their visual depiction. Like John in the Book of Revelation, Hildegard’s words can scarcely do justice to the magnitude of the vision. In a religion whose central claim is that the Word became flesh, the image is a necessary companion to the word—hence the inexhaustible cultural wealth born from the Christian experience.

The crucifixion as marriage

The painting we are looking at is composed of two juxtaposed scenes. Above are Christ crucified and Ecclesia, the Church, standing at the foot of the cross, collecting his Precious Blood in a chalice. Below, Ecclesia stands at the altar, arms outstretched in a priestly fashion while the sacramental species seem to flow from the cross as from a waterfall of grace. Four little vignettes render explicit the double movement of that vertical waterway: descent (birth and death; left side of the altar) and ascent (Resurrection and Ascension; right side).

This painting is remarkable both for its artistic clarity and for its theological depth. As far as the latter is concerned, we could summarise thus its most fundamental and boldest assertion: the Eucharist originates in an act of spousal love. “By divine power she was led to him,” writes Hildegard, “and raised herself upward so that she was sprinkled by the blood from his side; and thus, by the will of the heavenly Father, she was joined with him in happy betrothal and nobly dowered with his body and blood.”

The crucifixion, in Hildegard’s prophetic vision, is not the solitary, heroic sacrifice often depicted in paintings. It is an act of love both given and received. “Behold your bride,” says the Father, whose hand blesses the mystical marriage between the new Adam and the new Eve. The masculine offering of Jesus, symbolised by the outpouring of his blood, is not addressed to a collective, anonymous humanity, but to a Church personified in Mary, whose essential contribution to redemption consists in the feminine act of receiving, symbolised by the open chalice collecting the precious blood.

Of symbols and sacraments

Saint Hildegard’s symbolic use of colours and forms speaks of a time when men moved more freely and easily between the physical and the spiritual realms. Let us consider, for instance, her use of colour. Behind the standing figure, a starlit, navy blue signifying the earthly realm extends throughout the lower scene. Jesus’ halo, symbolic of his divinity, is painted in the same gold that fills the heavenly realm. Interestingly, his body is painted in fleshly, naturalistic tones, while the body of Mary shines with the bright radiance of divinity. It is as if a marvellous exchange had just taken place: her humanity became his, while his divinity became hers.

In the lower scene, the golden, heavenly light flows down on the Eucharistic species. The altar, also painted in gold, is covered with a white and blue cloth that relates to the inside of Jesus’ loincloth, visible in the fold above his waist. Hildegard thus reminds us that the Eucharist is the reenactment of Christ’s sacrifice and that the priest stands at the altar like Mary at the cross, receiving, in the sacred species, the gift of his divinity. To participate in the Eucharist is, therefore, to participate in the spousal response and the fruitfulness of the new Eve.

The painter as prophet

Hildegard’s paintings raise a question. Can a work resulting from a mystical vision qualify as art? Where is the artist’s creative freedom when she is urged by God himself to leave the revelations absolutely unaltered?

In this regard, it is interesting to contrast Hildegard with Hilma af Klint, whose 2018–2019 exhibition at the Guggenheim Museum created a stir in the art world. A follower of Rudolf Steiner’s “theosophy”, Hilma claimed to channel spirits under whose guidance she painted “automatically”. Loaded with obscure symbols, her work is opaque and esoteric. It seems to ask from us the same blind submission through which it was created.

By contrast, Hildegard’s work charms by its clarity and freedom. It speaks to the senses as well as to the intelligence. Hildegard is not painting “automatically”, nor is her freedom compromised. Her creativity lies precisely in her receptivity to the living Light. In that sense, she is much closer to Matisse or Giacometti than to Hilma af Klint.

As a painter, Hildegard was determined by what she saw, as Matisse and Giacometti were determined by their models. The image, born of that encounter between object and subject, is not a photographic depiction of what is seen, but a revelation of what eyes alone, with love, cannot see. Thus Hildegard participates in Marian receptivity and fruitfulness; her work stems from a love both given (by the object) and received (by the subject). Its beauty is not a subjective coating but—as Aquinas would have it—the splendour of its truth.

Father Paul Anel ministers to artists in the Diocese of Brooklyn, New York. 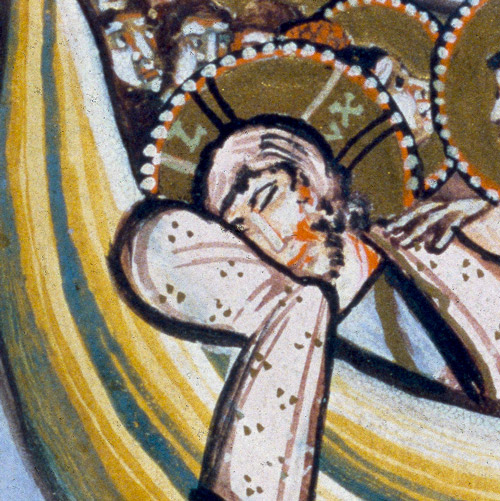 On a recent trip to visit my family in Maine I was welcomed, as is usual, by a small bundle of things in the room I claim while there. The contents typically include the few pieces of mail still addressed to me, such as my college alumni magazine, and whatever books, pictures, or bric-a-brac my mother has unearthed on her ceaseless mission to declutter the house. On this occasion, Mom had dug up the evidence of my earliest brush with fame: when I won a 1993 statewide essay contest on “What the American Flag Means to Me.”

Open to every Maine sixth-grader, the contest was sponsored by the Elks Club (officially and grandiloquently known as The Benevolent and Protective Order of Elks of the United States of America). Out of more than 700 submissions, I was one of six winners, meriting a take-home of one hundred dollars, an elegant plaque with the essay printed on it, and the obligation to read it aloud at the Elks’ state convention and our local Flag Day ceremony on June 14. In its small-town desperation for content, our local paper even featured a short writeup about me—including a picture corroborating my mother’s quip that I was “all teeth and glasses.”

The essay did not display any remarkable erudition or lofty theology, just simple gratitude for the freedoms we enjoy—the freedom of religion being my first example. I then added: “The flag makes me thankful for the many people that sacrificed their lives to help make this a better country. The flag makes me thankful for the people who helped build this country. Some famous people like Washington and Lincoln helped make this a better country, but some people who never became famous also helped make this country great. My great-grandparents came to America from Lebanon for freedom and a good life.” The essay concluded with the quotable, if predictable, “I’m proud of the stars and stripes of the United States of America.”

I repeat this story not merely to keep riding a wave of grade-school glory. Admittedly, Flag Day is not a major federal holiday, and I’ll bet many Americans don’t even know when it is. But with French and Lebanese ancestry and two grandfathers who served in the military—one in the Navy in World War II, the other in the Army in Korea—I learned from a young age to appreciate the hard work, sacrifices, and courage that ordinary, unfamous men and women have made for my sake. And I remain grateful to those who continue to do so.

There is in fact a virtue that forms us to respect, serve, and show gratitude for our nation. It is called, perhaps surprisingly, piety, and is part of the virtue of justice, which is the disposition to give to others their due. The virtue of religion is another such example of justice: it is the virtue by which we offer to God the worship that is owed, or due, to him. And he, as Saint Thomas Aquinas teaches, “holds first place, for he is supremely excellent.” Next, however, “man is debtor chiefly to his parents and his country.” Why? Because after the Creator and First Principle of All, “the principles of our being and government are our parents and our country, that have given us birth and nourishment. Thus, just as it belongs to religion to give worship to God, so does it belong to piety, in the second place, to give homage to one’s parents and one’s country.” To put it informally, none of us was dropped off by a stork or raised on the moon, so our parents and our country ordinarily have a natural claim to our respect and obedience. How appropriate, then, that we have a Mother’s Day and a Father’s Day on the calendar as well!

In the ten verses of the Second Letter to the Corinthians that we’ll hear at Mass on Flag Day this month, Saint Paul describes the lengths he and his companions went to in order to pass on the faith: namely, much endurance, in afflictions, hardships, constraints, beatings, imprisonments, riots, labors, vigils, fasts; by purity, knowledge, patience, kindness, in the Holy Spirit, in unfeigned love, in truthful speech, in the power of God; with weapons of righteousness at the right and at the left; through glory and dishonor, insult and praise. That’s a long list, and it reveals how deeply Saint Paul’s faith shaped his earthly life and activity. A Roman citizen, he trotted all over the empire preaching the Gospel. He spoke of paying taxes and respecting lawful authority (Rom 13:1-6), while maintaining that our citizenship is in heaven (Phil 3:20). He knew that the years allotted to him on this earth had to be spent advancing in the knowledge and love of God and bringing that knowledge and love to others. We share in that same mission, in a new land and within the circumstances of our own life and vocation.

Flying the flag of Christ’s love

Flag Day will soon be upon us again. Though it has no liturgical significance in itself, allow me to note that, this year, it falls right after the solemnities of Corpus Christi and the Sacred Heart. Perhaps on Flag Day then you would join me in offering the beautiful prayer often said at the end of Benediction that ties those two mysteries together, asking that they be revered in every nation: May the heart of Jesus, in the Most Blessed Sacrament, be praised, adored, and loved with grateful affection, at every moment, in all the tabernacles of the world, even to the end of time. Amen.