1/ For subscription questions, please contact the Magnificat team at:

2/ If you have editorial questions please write to: 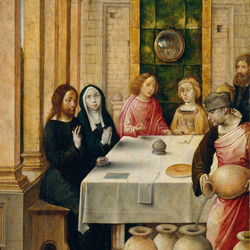 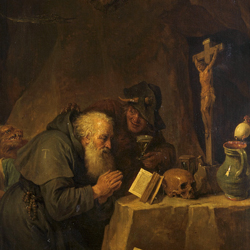 Why do we open every new year with the World Day of Peace? Armed conflict appears to be an insurmountable, perennial problem in this world. Perhaps, standing in the hallowed presence of the Mother of God, who also accompanies the start of each year, we can orient ourselves towards a deeper understanding of what drives human conflict.

There is a Marian Gospel passage which occurs this year in the middle Sunday of January, and which always seems to me to depict the attitude we need to emulate if the world is to become in any way a better place. This is the wedding at Cana, John 2:1-11. It is a crucial incident occurring at the beginning of our Lord’s ministry: in it, his mother enacts the role of the first disciple. She it is who turns to him in faith and, without even spelling it out, triggers his first miracle: turning water into wine. Because a human being has the audacity to point to a problem, God remedies a human insufficiency. Cana is a miracle connected with the nuptial mystery, and with divine generosity. The nuptial mystery has to do with bringing two distinct beings together. Divine generosity has to do with God’s creative capacity. At Cana, something runs out, and Jesus seemingly cannot help himself. Because his human mother asks, he makes the impossible possible: he does this in front of a large gathering of people, who don’t even notice he is doing it. Only his mother—and apparently the other disciples—notice. We know this because the passage ends with the words “and his disciples believed in him”.

Perhaps we need to “lean” on Jesus the way his mother does in this story. Not just to trust in him: but to fully expect him to intervene. The tangible effect of hope is to spread faith. And then, who knows what might happen?